Pepper Evans (17) is crushing it: GPAs, SATs, debate club, swim team, baking queen - you name it. She ended up in Manhattan, NY, three years ago thanks to the ever-growing business of her family's franchise, Big League Burger. Now it's senior year, college apps, interviews, and dealing with annoying nicknames like “Preppy Pepper,” coined by Jack Campbell. fellow senior, class clown, and captain of the diving team. Living in his popular, perfect brother’s shadow, he struggles to find a way to distinguish himself.

Not only does Pepper have pressure from her mom, she somehow finds herself in a Twitter war with a small deli a few streets down. Jack is the one batting with Pepper in this war. He's always known he's going to be the son that stays home taking care of the deli, however having big dreams of pursuing his growing interest and skill in app development. A new app called Weazel is Jack's creation, and it is taking off. With anonymous users in the Hallway and private chats that eventually out the users at a random time, seniors get to know each other, for study groups to relationships. Jack has his own partner, Bluebird, who's none other than Pepper herself. As senior year comes to a close, will these two realize that they're really the best friend they've been looking for forever?

BTSYA / Teen Reader (17):
This is Emma Lord's debut novel, and I see a bright future for her. Tweet Cute is exceptionally light-hearted and simply “cute” as the title states. Once I started reading, I could not put the book down. Seriously, I finished the book in about 7 hours. The banter between Pepper and Jack is the most captivating part of the story, without a doubt. Their love-hate relationship is so well executed you never want it to end. Both characters are very likable, and I ended up caring immensely about both of them.

There is a boatload of pop culture references that enhance the reading experience, as well as humor that will genuinely make you laugh out loud. Various times throughout this romance I found myself saying things like, “Oh my god. I love this and them so much.” Watching Jack and Pepper get closer as the story moves on is extremely satisfying and makes the reader even more invested in their relationship.

Tweet Cute also offers strong themes that revolve around growing up. Pepper and Jack both have their futures mapped out for them, and part of the story focuses on doing things you love and that make you happy, rather than what is expected of you. Even more prevalant is the importance of family. It is everywhere in this novel.

I recommend Tweet Cute for readers ages 12 and over. There is nothing graphic or inappropriate, but there are some instances of slight swearing, nothing that a middle schooler would be unfamiliar with. Tweet Cute’s adorable romance paired with its witty humor is something that has the power to make anyone believe in love.

BTSYA / Teen Reader (13):
Tweet Cute is a fresh, contemporary novel that is an irresistible tangle of life, love, and choices. I absolutely loved the way the main characters are presented as typical stereotypes when it couldn't be further from the truth! From the first page, the characters are vividly complex individuals, with different layers of emotions, dreams, and goals. I was warmed from within as the two teens carefully circled each other, darting forward with spicy tweets and comments, while a deeper relationship knit imperceptibly between the two. I also love how relevant and current this novel was, using modern-day technology and references within the text.

One part of the book I didn’t enjoy was the sheer amount of interaction between the two main characters. They talk in person, on the school's app, and via Twitter. At times it felt overdone instead of tension-filled. The family drama was also a bit unrealistic and abrupt at points since it didn’t contain enough context or backstory to really understand it. Lastly, a lot of the side characters were not very individual and seemed as though they were made from the same base idea or premise. For example, Pepper’s mom and Jack’s dad often blurred together in my memory because they were both so similar in their attributes and actions.

Overall, Tweet Cute is a light, sweet and funny novel, but lacks some development. It would be best suited to readers age 12+.

Teen Volunteer Reviewer (15):
I liked it Tweet Cute a lot, from the dual-point narrative to veils that keep being lifted, and so much more! At first, you think, oh Pepper and Jack don't know they're tweeting at each other, and then it's no! they've been texting each other anonymously for months! I would read this again Yes! for its cute story and heartwarming characters.

It's a feel-good book for sure, with lots of likes and retweets for sure:) Real characters, cute drama, and a happy ending make this book such a sweet read! Borrow this one. it is a sweet book, with many more like it I'm sure, so I wouldn't suggest buying it.


When you want a fun, contemporary story that will make you laugh out loud (both our teen reviewers did!) Tweet Cute is for you. It's wholesome fun and realistic characters make it the perfect beach read, too.


This is a teen romance that is pretty wholesome. There is some mild profanity.

Type of Book:
This is a romance about two high school students who are navigating family, school, and friendship.
Educational Themes:


As our teen reviewer points out, just below the surface there is a theme about following YOUR dream as opposed to the ones set out for you. Would your reader go about expressing their desires the way Jack or Pepper did?

Our 15YO reviewer said, "I'd say the most important is that your roots can tie you down, but they also hold you up." Great theme for getting a conversation going. 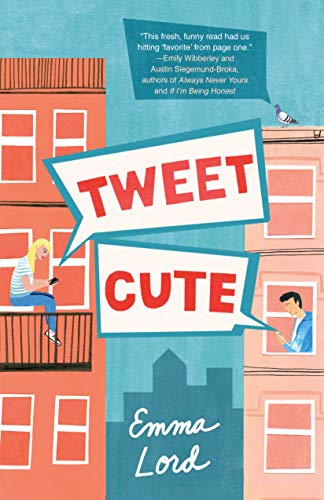 I Hate You, Fuller James

The Upside of Falling

You Deserve Each Other