Barbara Jordan's voice made you sit up and take notice. The daughter of a preacher, she thought she might follow in her father's footsteps. Instead, she chose to become a lawyer and an activist for Civil Rights. She was a fierce advocate for justice and equality, and wanted to ensure that all voices were heard, so she ran for political office. In 1972, Barbara moved from the Texas legislature to the US Congress, where she served for six years. After being diagnosed with multiple sclerosis, Barbara returned to Texas and used her voice as an educator.

Parent Perspective:
Wow. Just wow. What Do You Do With a Voice Like That is now on my shortlist of must-read nonfiction for young readers. Not only have I read it several times, I have also just sat back and enjoyed the illustrations. This is a book I want my 16YO daughter to read.


Children and teens today don't know Barbara Jordan. This book will have them (and you) asking "why not"? Through amazing illustration and Chris Barton's beautiful verse, she is still teaching us ... and there is a lot to learn.

Type of Book:
This picture book biography tells the story of Barbara Jordan's life in poetry and illustration.
Educational Themes:


The book's verse, illustration, and endpapers offer plenty of insight into Barbara Jordan's life. The reference to Jordan's opening speech to the Judiciary concerning the impeachment of President Nixon creates a natural curiosity to read/watch it.

The book also draws out Congresswoman Jordan's character - from her experiences as a child trying to figure out what to do with her life, to her choices and avocation to help others who didn't have a voice. Great conversation can begin by asking readers what they think about what she did, how she acted, what influenced her choices, etc. 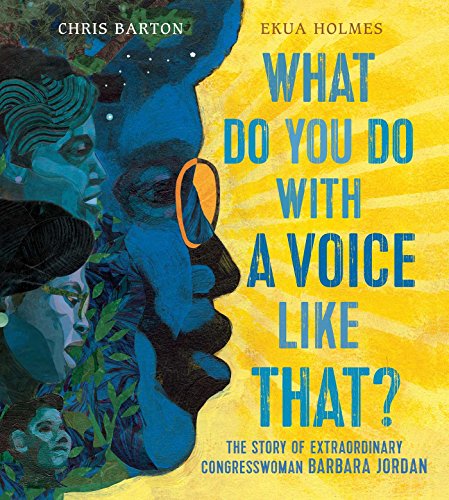