High school junior Jenny Go, a talented classical cellist from LA, knows what her future should look like: she’ll attend the Manhattan School of Music, join a professional orchestra, and live happily ever after. In the meantime, she devotes herself to a rigorous routine of practice, lessons, and competitions. Nothing can distract Jenny from this endless cycle—until she meets Jaewoo, a beautiful, mysterious boy from Seoul.

Late one summer evening, as Jenny ends her shift at her uncle’s karaoke bar, she decides to take a risk. One thing leads to another, and Jenny ends up at LA’s Korean Festival with Jaewoo. They share an exhilarating night before his flight back to South Korea the next morning, finding in each other a confidante and an escape from their usual weighty responsibilities. When Jenny finally returns home, she faces grim news. Her estranged grandmother, a cancer patient who lives in Seoul, needs surgery. To support her, Jenny and her mother decide to move there for five months. In Seoul, Jenny enrolls at an elite arts academy that offers ample time and resources for cello advancement. As she’s preparing for the new year, Jenny quickly warms up to the city.

To her utter shock, Jenny sees Jaewoo on the first day of school. She learns that the alluring stranger with whom she fanned a spark for one night in LA was—and is—also a glamorous K-pop idol. In fact, Jaewoo is a member of XOXO, the nation’s hottest new K-pop boy group. Soon, though, Jenny discovers that the boy who squeezed into a photo booth with her is not the same one whose music videos play on the subway. Jaewoo is frustratingly vigilant with his public image, only taking off his mask of platonic indifference when he and Jenny are alone. Despite the difficult and dangerous communication, they hesitantly grow closer. They have in common a striking maturity, ambition, and dedication to music, but tragically, this also pulls them apart. Jaewoo’s music promotion activities and Jenny’s grueling performance preparations leave them precious little time to risk a rendezvous. The relationship itself is the most precarious arrangement of all, since being exposed could ruin Jaewoo’s career. With their futures on the line, and as the date of Jenny’s return to America looms ever closer, Jenny must decide how much she’s willing to sacrifice for Jaewoo.

BTSYA / Teen Reader (16):
XOXO by Axie Oh is a modern teen romance that pulls off all the iconic K-drama elements in literary form. From family tensions and a climatic hospital scene to agonizing mixed signals and almost-kisses in the janitor's closet, the author tells a mature yet fresh story of forbidden love, imbued with Korean culture. The book keeps an apt distance from more serious themes, though as a result, it may sometimes feel shallow and rushed. On the plus side, it’s a quick, easy read that you can gobble up like you'd binge any K-drama series. I recommend this book to teenagers, especially those who are K-drama and K-pop fans.


If you like pop culture references in your contemporary romance, this is the light summer read you're looking for.

Type of Book:
This is a contemporary teen romance that explores traditional and pop culture.
Educational Themes:


Intended as a fun, light read, this book is intended for pleasure reading. Ask your reader about the characters: do they appear authentic or are they stereotypes or a mix? What were their assumptions about Jenny when the book began? Did they stereotype her? Did that change? 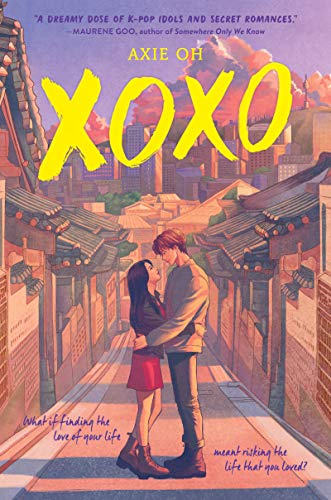