That’s me as Flat Stanley … always ready for adventure and learning. Several weeks ago I promised my readers that I’d recap our Spring Break trip to Virginia’s Historic Triangle: Colonial Williamsburg, Jamestown, and Yorktown, and today’s the day. 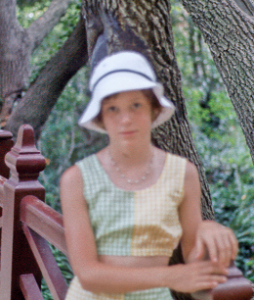 In a nutshell, it was a great trip, filled with all forms of American history and intrigue related to the American Revolution. For me, it was (in part) a walk down memory lane back to my first visit to Colonial Williamsburg in June 1975, as a soon-to-be 12 year old. I’ve been going through a lot of the old pictures that my Dad had digitized about 10 years back. There are lots of pictures of us (yes, that’s yours truly) but based on the number of images of furniture, art, craftsmen at work, et al., Dad was obviously collecting “teaching props” for his history classes looking at the American Revolution and American history.

A lot has changed in the intervening years … not the least of which is the way Colonial Williamsburg “works.” Back in the day, you went from site to site listening to someone in costume talk about the venue you were visiting and how it fit into American history. There is still plenty of that, but each day the script changes, depending on what milestone in colonial history is being recreated. Now, there are opportunities to witness and participate in the American Revolution as it unfolds.

For example, on the day we visited the Governor’s Palace, the staff was preparing for a ball. Lady Charlotte, Governor Dunsmore’s daughter, was one month old; it was also the queen’s birthday. “Neither will attend, but we love any excuse for a party,” our guide said! Some things never change, I guess.

She also wanted to warn us – particularly the visitor from Massachusetts – that things could be tense this evening. You see, there had recently been a Tea Party in Boston, and the Burgesses ordered a day of fasting and prayer to demonstrate their support for the gentlemen up north. Only the Governor – the King’s representative is allowed to do that. The Governor was “still” miffed with the members of the House of Burgesses, and she suggested that our guest from Massachusetts not mention it.

We also watched and listened as General Benedict Arnold (astride his horse) told us why the American Revolution was a failure. One of the things he cited – and which obviously stuck with Catherine – was that the revolutionaries were given a “cup of rice and two teaspoons of vinegar, while the officers had lavish meals.” She found the performance riveting, and I loved that I could add to her knowledge thanks to having read [amazon_link id=”1416961453″ target=”_blank” container=”” container_class=”” ]Forge [/amazon_link]by Laurie Halse Anderson earlier this year!

Each location that we visited that day and the Revolutionary City performances that afternoon also had an element relevant to that particular day in history. Engaging + interactive = fun.

The most exciting piece of our journey back in time was RevQuest, Sign of the Rhinoceros. It is a game that takes a young revolutionary (your child) throughout the Historic City in search of a traitor who is trying to kill a Revolutionary Hero. You have to figure out who is sponsoring the plot, who the hero is, where it will take place, and what the assassination method is.

Before we visited Williamsburg, we read a set of letters from “368” an agent who would help us, as well as other background material. When we got to Williamsburg, we got our orders, a set of code books, and, after meeting “368” our instructions on how to proceed, who to trust (ask for help), and what to do to blend in with the townsfolk (i.e., proper Colonial etiquette for young men and ladies).

It’s not an easy task, and it does require a little parental assistance. It is also very fun and quite a clever way to engage kids in American history. At several points along the way, you text a piece of information you’ve discovered to a specific number. You’ll get some additional details back to help with the next clue.

I don’t want to give away any of the details, but I will say that we learned as much as about American history as Catherine did. King George had ordered this particular hero killed (no surprise there), and there was a spy who helped thwart it (big surprises – yes, plural!).

At the end of the quest, when you have collected all of your clues, you gather one more time. In pulling together all of the threads, our Revolutionary narrator explained the various ways the historical information surfaced. In some cases, the information started out as family stories, and, over time, more facts emerged – from different sources – to transition the info from “oral tradition” to “history.”

Although we had hoped to combine actual touring with the quest, Catherine was set on finding out which hero of the American Revolution was at risk, and how. For example, rather than visit the Palace and then look for the “declaration in the cellar,” we went to the back gate, where Catherine exchanged the appropriate greeting with the Friend of Liberty, and got directions to the cellar to gather her clue. 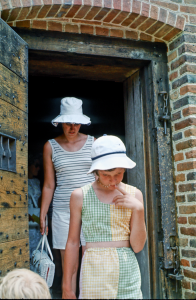 Given the number of  heavy, loud sighs, and choruses of “I’m bored” we heard over those few days, we wondered just how much “sank in.” At the risk of repeating myself, I guess some things never change! I’m sure my parents thought the same thing back in 1975 … could I look any more bored?

In these intervening years, I  had forgotten the boredom. The things I had declared were making the trip to Colonial Williamsburg boring are now, as an adult, the things I remember “enjoying” the most. The things I wanted to share with Catherine.

It was a vacation, not a class trip, but we had hoped that Catherine would find the experiences in Colonial Williamsburg fascinating. Just when we thought all was lost, an interesting thing happened!

Within minutes of arriving home, Catherine asked for some tools. There was a big rock outside and she was going to carve it into a chair … just like the tradesmen and tradeswomen we had been visiting.

Now, when I look out my bedroom window, I see what used to be a large rock surrounded by pieces of its former self. Every time I look at it, I come to the same conclusion: looks can be deceiving. Just when we didn’t think she was paying attention, Catherine was absorbing it all.

Things may not look the way we envision – or remember – them, but they are wonderful, surprising experiences all the same. Books, readers, tourists … are there many differences?