It is no surprise to those of you who have hung around the Reading Tub that we love Mrs. P. and Mrs P’s Magic Library. Still, imagine my surprise when she sent a note asking if she could stop by to talk about storytelling.

Can’t you just hear that lovely voice? That welcoming, southern drawl? Well, without further ado, pull up a seat and let’s listen …

A caveman runs into his cave, takes a seat by the fire and, still trying to catch his breath, tells his family about the huge black wolf that jumped on him just moments before, and how he escaped a horrible death by hitting the toothy, drooling beast on the snout with a tree branch till it roared in pain and galloped away into the woods. The caveman didn’t realize it but he was one of the
world’s first storytellers. He was beginning a tradition of passing stories by spoken word from generation to generation, changing and improving them with each retelling, and eventually engraving them on the printed page, preserved intact for future generations like an insect trapped in amber.

And who knows? The caveman’s story about the wolf might have evolved over the centuries into “Little Red Riding Hood,” a fairy tale so ancient no one is really sure whence it came. But it’s a story that is still read by parents to their children and is one of the most popular videos on my storytelling website, www.MrsP.com.

I decided to build my website around the art of storytelling (in the sense of reading classic stories to an audience) because it creates a special bond between the reader and the listener. The reader, with only words and the passion of her voice, is helping the listener create their own special version of a story, with their own specific images from their own imaginations. No two listeners will ever have the same experience hearing a story because each listener is an active participant in its creation. It’s the difference between watching a baseball game on TV and going outside and playing your own game. Unless you get beaned in the head by a line drive, odds are creating your own game will be more fun, memorable and fulfilling than just watching someone else’s creation.

Of course, the storyteller can help the listener create her or his own version of a story by offering an enthusiastic performance. The best storytellers let down their guards, forget they’re dignified adults and become the characters and feel the emotions. I like to use different voices for the different characters in my stories, and I rehearse them just as diligently as any of the parts I’ve played in my other life as an actress in Hollywood. Sometimes it gets a bit complicated, especially in stories with a lot of characters: “Oh, dear – did the Mad Hatter have a British accent and a lisp, or was that the Cheshire Cat?!” Somehow, though, I’ve always managed to sort things out at the last second and have avoided any embarrassing and tragic voice mix-ups! 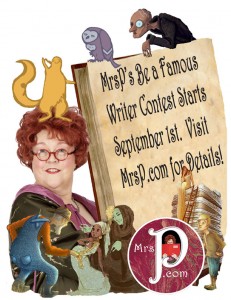 One of the greatest joys of my life as a storyteller is reading aloud stories written by children. Every year I host a writing contest for kids. The winners have their stories read by me on my website for everyone to hear. It’s so much fun, such an infinitely good time for both my heart and soul, to help bring to life the world of a child’s imagination! And what makes me just as happy is what the writing contest teaches kids: how much power they hold in their words and their thoughts. Even a caveman could see there’s no better lesson in life than that.

Details on the writing contest can be found at my site http://www.MrsP.com the contest runs through October 15, 2010.

About me: TV star Kathy Kinney (“The Drew Carey Show”), portrays Mrs. P and is also one of the creators of the website. The website endeavors to expose young people to great books and stories through a celebrity storyteller, Mrs. P. MrsP.com has no advertising and is completely free, making it a fun and educational online destination for teachers, parents and children. The site also contains interactive games, coloring sheets to download, and activity guides to accompany chapter books like “Alice in Wonderland”. Every story also offers read along options so children can see the words, which is helpful to early readers, and ESL students. Mrs. P is the recipient of The National Parenting Center 2009 Seal of Approval and the American Library Association distinction of “Great Website for Kids.” You can follow Mrs. P on twitter at http://twitter.com/MrsPstorytime

12 responses to “The Art of Storytelling: Please Welcome Mrs. P to the Tub”