The Weekly Geek Challenge #4 has pushed all of my other to-do’s to the back of the inbox.  The idea is to choose books with a political or social issue that matters to you.

I love this idea because it is rather timely … when was the last day you can remember not hearing the names Hillary, Barrack, or McCain? Even when I don’t read the articles, my six-year-old Kindergartner points out their pictures. Which leads me to my next point …Books that get kids reading about an issue get kids THINKING. They’ll remember it (whatever “it” may be). My daughter knows who the presidential candidates are because she read Time for Kids in school.

The same is true for stories. Great books — and their characters — stay with you well after you have finished reading. They might get hooked on reading more about an issue. They might want to do something related to an issue, or they may just want to read more books by an author. Whatever it is, they’ve found the secret of reading: it can change your life.

Here are some books that introduce kids to social and political ideas that can transform their world. Some are historical others are set in more modern times. We included a summary here. If you’re not sure how it fits the topic, click our full review. That will tell you more.

Child out of Place: A Story of New England by Patricia Q. Wall. Matty and her family are slaves who serve Mr. Joshua Warren of Portsmouth, New Hampshire. In 1802, when Matty was five, Mr. Warren agreed to grant his slaves their personal freedom. Though receiving their freedom papers technically freed them, American society was not ready to treat former slaves as equals. In fact, everyday life for black people, free or slave, was very dangerous. Matty is sharing her life’s story with her children and grandchildren to help them understand and appreciate their heritage. This historical fiction novel takes place in 19th Century New Hampshire, and follows the life of a newly freed African slave. Read our full review.

The Computer’s Nerd by W. Royce Adams. Arthur is bright, quiet, and studious by nature. Three classmates have been making his life miserable, and Arthur is scared and frustrated. Help comes to young Arthur, the class nerd, via a computer fantasy when he discovers “The Game,” which allows him to get revenge on the bullies. At first, Arthur, felt justified in inflicting pain on the bullies. As the game continued, it ratcheted up the level of painful consequences for the bullies, Arthur becomes uncomfortable about what he’s doing. Has the computer taken over his life? Is his goal to seriously injure the bullies? Has he gone too far to redeem himself? This is a fantasy adventure book for teens. Read our full review.

Just Call Me Joe Joe by Jean Alicia Ester. Joe Joe Rawlings is ten years old. He has a dilemma: his best friend is starting to hang out more with kids who get in trouble. When he goes to the neighborhood store, the shopkeeper accuses Joe Joe of being part of the gang who trashed his store just minutes before he arrived. He is devastated and very angry. He takes his book about the Negro Baseball League and Cool Papa Bell and decides to read to calm down. The story helps Joe Joe understand his situation and find the courage to stand up for himself. This is the first book in a series about urban life and the choices kids are faced with these days. Read our full review. 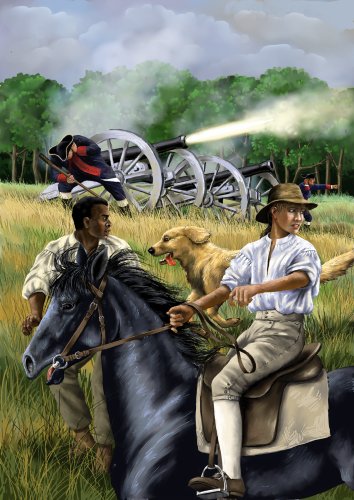 Red Thunder: Secrets, Spies, and Scoundrels at Yorktown by John P. Hunter. Nate Chandler, a fourteen-year-old boy, lived on the family farm near the York River. In May 1781 the British launched a major campaign at Yorktown to end the six-year War for Independence. Bands of British Cavalry roamed the area ruthlessly attacking and killing innocent citizens. Nate and his parents were left for dead, their cattle taken, and the farm burned to the ground. He was determined to avenge the attack but felt helpless. A young militia officer recognized Nate’s ability to “think-on-his-feet” and paired him with James, a former Negro slave with a photographic memory. They became an espionage team that provided valuable intelligence that General Washington and General Lafayette used to defeat the British and end the Revolutionary War. This is a historical novel that tells the story of two boys at the Battle of Yorktown. Read our full review.

Web of Lies by Beverly Naidoo. Having fled Nigeria and resettled in London, Femi and Sade thought they would finally be safe. While Sade is dealing with her mother’s death and the possible intrusion of a “new woman” in their lives, Femi is getting more and more involved with a street gang. It isn’t long before their resilience as individuals and as a family are once again put to the test. This is a novel that allows you to journey with the characters (and their father) as they deal with the presence of a gang in their lives. Read our full review.

Regrettably, we couldn’t find any  non-fiction “grabbers” in our book bag. If you’ve got one, please leave a comment and add it through Mr. Linky. Be sure to put your name and post in the link.

3 responses to “The Issue of Books”