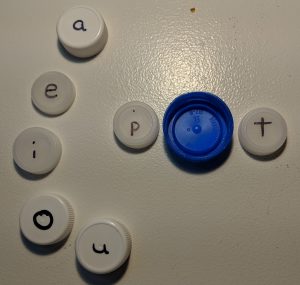 The first words we learn as we start to read are those with short vowel sounds. Think words like bat, net, hit, fox, and cup.

The next step is long vowels. Essentially you have word where two vowels are working together to create a single sound: cake, beat, kite, boat, and cute. Plan becomes plane, bit becomes bite … you get the idea. When the vowels come together, the first vowel says its name. It could be ..

This is where your collection of bottle caps of different sizes and colors become a literacy tool. These larger, different colored bottle caps can help your child to visually recognize words with long vowel sounds. Here are a couple of examples.

Do you remember this song about Silent E from the show PBS Kids show Between the Lions? It is a clever illustration of how adding an E to the end of the word pushes the first vowel to “say its name.”

In our sample, the word cut becomes CUTE. To help a young reader visualize the change, we set the affected letters inside a larger, different-colored bottle cap.

In the first sample, we emphasized the change by putting the “U” inside a purple cap. That’s not the only option. Try

(a) capturing the [silent] E by itself and not putting the “U” in a cap; or

(b) putting both vowels in bottle caps.

Using two larger / differently colored caps may give new readers a little extra help in visualizing the relationship between the vowels. Follow your child’s lead – what visualization works best for them?

When two vowels go walking .. the first one does the talking.

Have you heard that little ditty? It is one of the most popular songs from the Between the Lions collection. What I love is that it features all of the vowel pairs – including ay! – and uses them multiple times.

There are plenty of options for illustrating and emphasizing the idea that the first vowel says its name. In this case the “A” in bait.

In the second sample above, I happened to have a larger black cap, so I used it to show “darkness” and the idea that the “I” is quiet. Too esoteric? Maybe.

Letting your new reader manipulate the bottle caps and decide what the colors mean is the best part. It gives them a chance to be in charge (which doesn’t happen often at their age). Plus, the hands-to-brain connection will help reinforce learning.

Schoolhouse Rock is an EXCEPTIONAL resource. YouTube hosts a great collection of videos with SR songs that are fun, clever, and cover just about every elementary language arts and social science subject.

Here’s a link to Between the Lions Fanatic YouTube Channel with more than 130 videos [30 seconds to 5 minutes] from the show.

Also in this series: