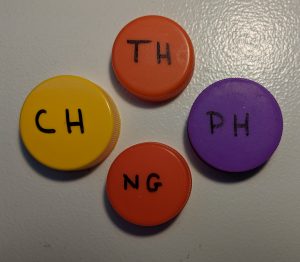 Welcome to the fifth and final post in our series about a fun, easy – and free! – way to help new readers. We started by collecting bottle caps and creating an alphabet to giving kids a chance to manipulate the letters into words helps. Because kids tend to be very literal, this visual method of practicing helps to reinforce learning because they are actively part of the process.

Over the last two weeks, we have covered vowel sounds and vowel blends. This post brings us to consonant blends, also called digraphs. There are blends

To help reinforce the blended sound, I used the larger bottle caps of a different color and put both letters together.

Letters That Keep Their Sounds

There are lots of blends that keep their individual letter sounds: TR (train), LM (calm), and NG (bling) come to mind. Because NG will soon become “ING” we picked that for our sample on how to visualize the combined sounds when your child practices and builds their word bank.

The most common sounds are created for “CH” and “TH.” These are sounds that you will find at the beginning or end of a word.

Just as you did with word families, you can also create a base where only one letter is moved.

In our samples, we used chip/chap and such/much to illustrate the process.

Letters That Combine Into a New Sound: PH

Readers can find “PH” anywhere in the base of a word.

PH morphs into an F sound. There are a couple of different ways to reinforce the concept. Initially, you may want to have a letter F bottlecap nearby or rest on “top” of the PH to help with pronunciation.

Letters That Blend Into Silence

We are illustrating this two ways. The GH can stand alone, or it can be combined with its frequent partner, the letter T. Insetting the GH into a larger cap can help signify its role (in this case silence).

We hope that the alpha-caps have given you some ideas on ways to help new readers. Some kids can look at something on a page and it is etched in their brain. Others learners need tactile activities to reinforce learning. Others are helped by visual cues (like color coding).

One of the bonuses of “playing” with bottle caps is that it can give you insight not just into the way your child processes information, but also what helps them be a confident learner. Have tips that will help young readers – be sure to add them in the comments.

Also in this series: